Did you ring the doorbell?

This house is your house –

Open so long as you let yourself be heard.

But locks must be engaged, shutters closed

but will and win if not on guard

Feel free to come by, as (is) possible, you’ve come by before so unknown

So entrance was removed.

Time, this, as always will be different.

If on verge then do well to continue

And this teetering persists?

Make a go of it

afford a balance to repair’s value.

Which side of the Hudson is for Verlaine

And which for Rimbaud after the break-up?

with all the best pharmaceutical grade . . .

And two rivers and upstate to run to and Jersey

ready to back pocket

on train out of here

So, Seine, which side is for Warhol and which for Basquiat

to have back what is held close /

Poetic Statement: Experience is a plurality of convergences, interruptions, digressions, departures. These occurrences are the fragments which create larger memories and the narratives one attempts to convey to others. The closer one comes to examining the past, the more one notices how the present constantly interferes. The narratives one creates from the keepsakes of yesterday are shattered and forged again with new data – sensations, perceptions, insights, exemptions, the heard-words, the read-words, the thought-words, the dream-words, the images and ideas of having been inserted into a life of disturbances.

Bio: Kenyatta Jean-Paul Garcia is the author of This Sentimental Education, ROBOT and Yawning on the Sands.

The Parisians by AJ Kaufmann

Bio: I am a Polish poet and songwriter. I have been around the small-press poetry scene since 2008. “Siva in Rags” is my most recognized piece of work when it comes to English-language poetry, I think. I have been published in the USA (Kendra Steiner Editions mostly) and UK. My work has been also translated into Bulgarian, and I recorded and released 2 solo albums with self-penned songs. I also have a band.
Here are some links, where information about me can be found.
A. J. Kaufmann’s “Siva In Rags” (KSE #102) now available
new Sun Ra-inspired poetry chapbook from Poland’s A.J. KAUFMANN, “Hosannah Honeypots” (KSE #249), available now!
Парцалена Шива-1 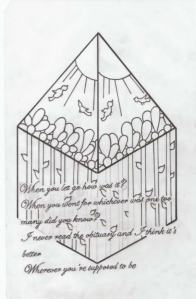 Molly Wilmes, is a BFA Sculpture candidate at the Art Institute of Chicago.

This Chapbook is about grieving the loss of a friend, I work from my honesty, using a particular narrative voice to touch on something universal about grief.

Deep Within the Ravine by Neil Ellman

Deep Within the Ravine

(after the painting by Hans Hofmann)

by skin to bone

the hallows of the earth

Bio:   I live in and write from New Jersey.  Many hundreds of my poems appear in print and online journals and anthologies throughout the world, including Alba, Anastomoo, The Camel Saloon, Counterexample Poetics, ditch, Fowl Feathered Review, Haggard & Halloo, PressBoardPress and Otoliths,among others.  I have been nominated for the Pushcart Prize, Best of the Net and the Rhysling Award.

Poetic Statement: Mine is a poetry of big ideas in small, singular packages.  I want the meaning to come through in accessible form–but with a slant, and always with a musical quality.

You asked me to explain to you a past

the always-correct Party had chosen

to hide from you. Yet in a new place now

you wondered about the saints and angels

within and without of Maria im Sand.

Willing I went with you over the

winds bringing in clouds into the valley.

I pointed out the Virgin’s deep blueness,

the smooth apostolic face at the cross,

the mixture of styles, depending on time.

In the cemetery an old man spoke

we exchanged a glance thinking of new deaths

and walked the streets of the closing-down town.

Interest does not always lead to belief.

But each November you light a candle

for your mother. You are a pilgrim

pursuing an uncertain goal as you

seek for answers to your unvoiced questions.

I think back to this day, and wish you peace.

Sunny morning on the crest of the hill,

Slightly-cold wind in this January

Blowing down the slope toward the Savannah.

For weekly glimpse of transcendent grandeur.

Uncertainties hover here over us,

During flow of familiar devotions

Suffusing unveiled glory over all.

Some linger later outside on the porch

Viewing the landscape with improved vision,

Savoring the moments they wish would endure.

A View Backward from the Bend

Every now and then, my path will bend.

If no mists fill the valley, if cloudless

Skies permit, I can gaze where once I went.

On ribbons of path straddling the ridge

That so thinly disguised a cul-de-sac.

Stretching to the sky, several towers,

Some unfinished, others now collapsing,

Their classrooms with closed windows preventing

Fragrant air to alleviate the staleness,

Not knowing the land where lemon trees bloom,

For some non-existing enlightenment,

Refusing to look at the external.

Occasionally a face that I see,

Or a song wafting melody to me

Reminds me of my travels on that path,

Reconnecting me to what I had loved

Even if no longer can be found

Even if it no longer can be loved.

As quickly as it comes, it disappears

Bio: Arthur Turfa lives in the South Carolina Midlands, but his poetry contains influences of his native Pennsylvania, California, Germany (where he has also lived), as well as other places. He is working on an e-book of his poetry, scheduled for release later in 2014. Published in the Munyori Literary Journal and South Carolina English Teacher, he also maintains a personal blog, Some Poetry at aturfa.blogspot.com

Poetic Statement: Essentially I think Wordsworth had it right, although I do not always find long-lasting tranquility. Something or someone grabs a hold of me, and lingers until I recapture the moment, the glimpse, or the time from my life. My poetry attempts to include the reader into what I experienced, rather than telling the reader all about it or me. At times I strive for a sense of closure, at others I want to preserve something (more as a Symbolist than an Imagist). Whom do I read; Eliot, Auden, Rilke (in the original), Frost, Updike, Shakespeare, Bukowski, and others.Language that sings is more important that language that rhymes.

For love is all about filling the void

They were accosted on the gondolas of Venice

The honeymooners, and asked, ‘Why must you love, if you please?’

They hemmed and hawed, made much ado

And then decided to do as Romans do,

And if the home and the heart live together

It means we have homes everywhere.’

Quarter-Life Crisis
when the years

are so full of

Bio: Ankita Anand has been secretary, National Campaign for People’s Right to Information, editorial assistant, Penguin Books India, coordinator, Samanvay: IHC Indian Languages’ Festival and member, People’s Union for Democratic Rights. She is the co-founder of a street theatre group called Aatish, which produces plays on socio-political issues. As a freelancer she writes and edits. Her primary interest lies in working for the prevention of violence against women.

Her poetry has been chosen for publication by The Indian Review of World Literature in English, The Riveter Review, Papyrus-The Poetry Journal, First Literary Review-East, Em Dash Literary Magazine, Sugar Mule, The Criterion, Writers Asylum,Labyrinth, Lakeview International Journal of Literature and Arts and DeltaWomen Magazine. Some of these can be read at anandankita.blogspot.in. She wants, through her poetry, to make the felt read.

Poetic Statement: My poetry occurs when multiple layers of feelings simultaneously get entangled with each other, when I am feeling, and strongly so, but do not know what, why and how. In the process of putting my finger on the spot, poetry happens, as it does when I experience beauty and am compelled to share it, to reassure the word that it shall exist as long as we do. The hope is that as poetry helps me define my self and feelings, it will create connections and identifications in the readers’ mind and help them understand and articulate their own feelings better.

1. I never much cared for hosting parties.

Always, it seemed, in the morning there’d be broken glass.

2. I’d crack abstractions into the glass until I could recognize myself, a hundred eyes searching back at me for what, they did not know.

3. I offered a bandage to a broken mankind.

I forgot the antiseptics, said I’d be back within the hour.

We could only stare at it through all the barbed wires and their proclamations: turn around, there’s enough of a mess for you to swim in there.

I thought myself Bathsheba, but I couldn’t even dip my feet.

5. I thought myself an enlightened convict but they wouldn’t give back the key. “We said it would only be on my conditions,” but he’s gone and he can’t hear, and he didn’t say he’s coming back.

He’d fold them into origami, flowing into another world on the breathe of every kiss.

7. In the corner I recalled my grandmother’s warning like a prayer.

Do not heed the sun. The moonlit reveries & their daytime retrieval is the only way to stay unburned.

the sugar-titted histories overflowed from my nursing bottle every time I tried to heat it up.

9. The mattress is grey.

Not grey in indistinguishable soot, but the led of pencil etchings we could dream then erase. I like to lie here with you at my side.

Bio: Stephanie Kaylor is an Albany-based daydreamer currently working enrolled in two graduate programs: an MA in Media Philosophy at European Graduate School, and an MA in Women’s Studies at the University at Albany. She is a staunch advocate of ecriture feminine, but won’t shy from admitting to being seduced by the female beats. Stephanie is also currently working with Reginald Lewis, an incarcerated writer whose information can be found at facebook.com/reginaldsinclairlewis.